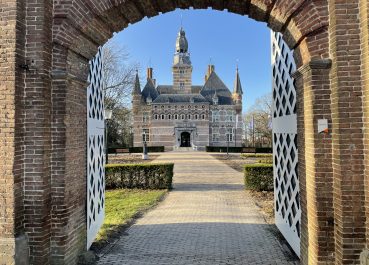 Despite its neat Renaissance appearance, Wijchen Castle has had a long and turbulent history. Over the centuries, the castle has been the setting of strife, exiled love and royal life.

The Van Galens, successors of the first lords of Wijchen, build the tower into a real castle. It gets a gate and a courtyard. However, under pressure from Kleve, they had to hand over the castle to Gelre in 1392.

The castle of Wijchen is mentioned for the first time in written sources in 1392. In 1535, the noble property of Wijchen is sold to the Bronckhorst-Batenburgers. They did not live at the castle for long, Gijsbert and Diederik were beheaded in 1568 by Alva in Brussels. After that, the castle deteriorates for a long time and has been destroyed at least once.

On June 10, 1609, Princess Emilia van Oranje Nassau, daughter of Willem van Oranje Nassau, and her husband Don Emanuel of Portugal buy the property and castle, Huys te Wychen. The Huys also includes a farmhouse, two pieces of land, half a pond (Wijchens Meer) and woodland. The tenancy yields 2,000 guilders annually. To pay for it all, Emilia uses part of the inheritance from her mother Anna van Saksen and sells her pearl necklace for 9,000 guilders.

The princely couple builds a completely new castle in Dutch Renaissance style on the remains of the old castle. Although tightly set up, everything has been done, including the arkel turrets, to give the whole a castle-like style. From 1614, the princely couple and their eight children live in the castle for more than ten years.

Emilia dies in 1629. At that time she lives separated from Emanuel who lives at the court of Brussels. The castle comes into the hands of their children and in 1640 they sell everything to Philips van Nassau, lord of Grimhuizen near Breda and grandson of William van Oranje Nassau.

After passing from hand to hand in three different families, the castle and fiefs come into the possession of the French Osy family, with the noble title Baron van Osy, in 1771. They enlarge the windows of the castle and in 1799 Baron Carl d’Osy rebuilds the old mill on the “Molenberg” into a substantial belt mill.

In 1903 Lady Adriana Wilhelmina Andringa de Kempenaer from The Hague buys the castle with garden and farms for 26,850 guilders. In the “Sinterklaas” night of 1906, the castle burns out completely due to a chimney fire. Only the standing walls are spared. Furniture, library and art treasures all fall prey to the flames.

The Lady wishes to build a villa on the site of the castle, but she is convinced to rebuild the castle. As early as 1907, the castle, under the direction of the Nijmegen architect F.A. Ludewig, is completely restored based on a detailed description of the castle by the “Rijksdienst” from 1903. In 1908, Wijchen Castle is restored to its former glory.

After the death of the childless lady, the castle comes into the possession of her cousins, the Van Humalda van Eijzinga family, in 1926. In the crisis years of the 1930s, they are unable to sell the castle. Ultimately, in 1932, the Municipality of Wijchen buys Wijchen Castle for 32,000 guilders at the initiative of Mayor Reinder van Rijckevorsel. Since then, the castle is accessible to all villagers of Wijchen and houses Museum Castle Wijchen since 1996.