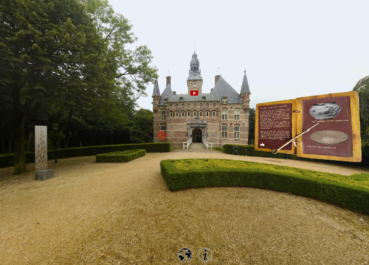 How did Wijchen look in Roman times? How dit people live then? How were people burried? This can be discoverd with the digital walk of 3,5 km in the center of Wijchen. The walk will be launched on Saturday April 22, 2017.

The walk has been developed with with a fund set up by the municipality of Wijchen.

The route starts at castle Wijchen and via the grave field near the mill to the marketplace. In Roman times Wijchen was already a regional center. In the church St. Antonius Abt materials from the Roman era can be seen. From the market the route goes to “De Tienakker” where fragments of a Roman villa have been found. The route ends at castle Wijchen.

How to get the route?

With a museumticket you can receive a QR-code with which you can open the route on your smart phone or tablet. If you cannot open de route with the QR-code our hosts can give you a link.

How does it work?

The route stats at the castle. The image can rotate 360°. By tapping on the several symbols you get more information or a video about the locaction or you can tap to the next location. Please note, that the written information is only in Dutch.

Saturday April 22, 2017 at 14.00 h the walk will be launched during a meeting for guests. After that the QR-code is given with a museumticket.