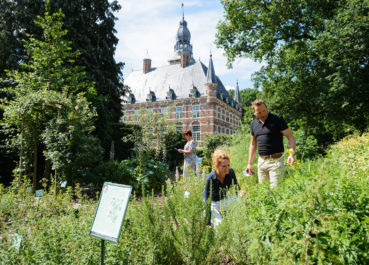 Museum garden ‘De Tuun’ is unique in the Netherlands. From the spring until the autumn visitors can wander in the garden and look at the agricultural plants that grew in the area from the Late Iron Age up to and including the Middle Ages. There is also a herb garden with plants from the same era arranged according to their uses – pot herbs, medicinal herbs, ritual plants and dye plants.

De Tuun forms an extension of the Museum’s archaeological collection that presents the rich rural history of Wijchen and its surroundings. The museum garden gets its name from the old Dutch word ‘tuun’, meaning a walled or otherwise protected area of ground. The modern Dutch word for a garden ‘tuin’ is derived from this, as is the English word ‘town’- originally denoting a walled settlement. In De Tuun you can see, smell and touch the plants that were cultivated here during the Late Iron Age, the Roman period and the Early Middle Ages. Together these three phases make up the Early Historic Period. A stroll through De Tuun is a stroll back through time. De Tuun comprises two parts. Half of the garden is made up of small fields, one for each time period. The other half is a herb garden, where dozens of herb types are arranged according to their uses.

The first field in De Tuun is planted with crops that were grown during the Late Iron Age from circa 250 tot 12 B.C. During that time agriculture went through a number of important developments, but gathering plants from the wild was still very common. The end of the Iron Age was heralded by the arrival of the Romans. The changes that both their presence and their different eating habits caused in agricultural production can be seen in the second field, which covers the period 12 B.C. to 406 A.D. The Early Mediaeval agriculture represented in the third field mirrors the situation in the years 406 – 1000 A.D. This period was characterized by a further expansion of the available crop sorts. Another important influence at this time was the increase in rules and regulations regarding the use of agricultural land.

In the herb garden there are separate sections for culinary, medicinal, ritual and general use herbs. The information on the panels in the garden itself charts the continuous development and varied applications of botanical knowledge during the Early Historic Period.

De Tuun is prettiest and at its most interesting from May until the end of July. Nonetheless a visit is worthwhile at any time during the opening season. In addition to the regular opening times the Museum holds special open days in De Tuun with guided tours and other special activities. More information about open days and activities in De Tuun can be found under information visitors.

De Tuun is located to the right behind the castle. It is open from end of March until the end of October during the opening hours of the Museum. Tickets are on sale in the Museum.