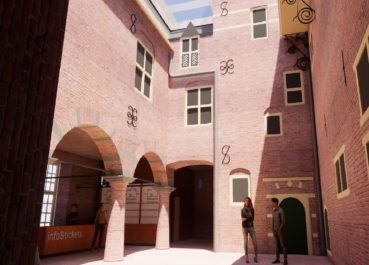 Castle Wijchen will be renovated. Preparations for this are in full swing. From April 1 2020 onwards the museum in the castle is closed. This is for the possibility to carry out the restauration. But Museum Castle Wijchen will not close the doors. The museum remains active in the coach house next to the castle. Wijchen’s pride is the renaissance castle wit its canal. Its history goes back tot the fourteenth century. Together with other caracteristic elements in the centre of Wijchen, such as The Old Mill, the church of Antonius Abbot, ’t Laantje and some classical premises it is the historic visiting card of Wijchen.

For Wijchen and its inhabitants the castle is a very special location. From the outside it looks magnificent, the inside is another story. Because of several reconstructions during the 20th century you can experience little from the original castle. Also a part of the castle is not accessible for anybody. Besides it is not practically equipped.To conclude cracks arose in the cellarfloors near the tower and the vaults. Therefore the foundation of the tower needs to be restored.The council of Wijchen starts the restauration of castle Wijchen in may 2020. In the middle of 2021 the castle me be admired and used again in its old glory. In this way the extraordinary historic place of Wijchen will become even more attactive for inhabitants and vistors.

With this large redecoration we recover the 17th century castle in its old glory. In addition the inner court will get a glass roof and will then be a fully fledged receptionroom. Several rooms inside the castle will get back their original character. Also the basement of the castle will be partially deepened in order to give visitors the possibility to make a tour through te basement. Also underneath the old vaults there will be created a new archeological place of exhibition. The castle will be better accessible , so that everybody can enjoy it.

Also “behind the screens” the castle will have an architectural refreshment. An improved airco system and durable warmth regulations are very valuable interventions , but they will make staying in this inheritance more pleasant. The castletower in the meantime has some cracks and subcidences. During the works therefore the foundation will be strengthened to avoid more subcidences. To conclude the meeting rooms will in the future better be used for social and cultural activities.

Better visibility of the museum