Home > Emilia of Orange Nassau. Lady of the Castle in Wijchen

Emilia of Orange Nassau. Lady of the Castle in Wijchen 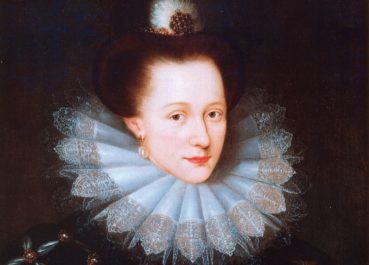 “After his assassination in 1584, William of Orange left behind a consternated nation and an almost bankrupt family. We could quite imagine the sad expressions on the faces of his widow and his twelve sons and daughters gained from their existing portraits. An authentic portrait of Princess Emilia of Nassau (1569 – 1629), Williams third daughter, a remarkable person who makes us curious about her appearance, had not been found until recently.”
Coppens, T. (1991, 19 November), Prinzessin Emilia, wie sie war (as she was known). NRC

Eventually, a painting emerged portraying the sophisticated and learned Emilia, painted by Daniel van den Quecborn. It is the only image of Emilia of Nassau born 10 April 1569 that we are aware of. She led an excessive life full of ups and downs, intrigues, love and suffering.

The Dutch have a special place of remembrance of Emilia, the castle of Wijchen. In 1609 Emilia and her husband Emanuel of Portugal discover a derelict castle in Wijchen with adjacent land. They buy the estate and in the course of the following years build a new castle on top of the old fundaments. From 1615 onwards the couple resides there on regular basis. Their code of arms embedded at the front entrance of the castle depicting two interwoven initials of the letter E for Emilia & Emanuel have been known to the local people of Wijchen for a long time. In the inner court and at the outer wall of the castle a series of allegoric depictions can be discovered as vivid memory of the couple.

More than just the owner of the castle of Wijchen, Emilia, also referred to as the ‘learned Emilia’, was greatly respected as an intelligent woman. She held court as a charming and highly regarded hostess at the side of her unmarried brother Maurice at his palace Binnenhof and in Delft. When she encounters the young Portuguese Prince Emanuel it is the beginning of a tragic love story.

The exhibition tells the story of an extraordinary woman in restless times. Outstanding loans from various collections help to bring Emilia’s story to life once again. Experience the story of a strong and independent woman of the early 17th century who stood her grounds.

With friendly support from: