Home > Wijchen and the Indies

Wijchen and the Indies 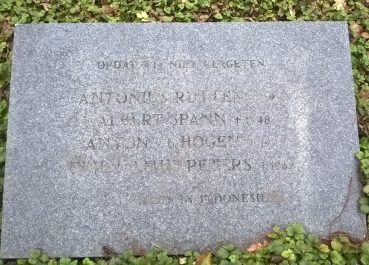 The exhibition Wijchen and the Indies is about the bond between Wijchen and the former Dutch Indies, todays Indonesia. The monument is the start of the exhibition. Throug the four names we found that dozens of young draftees from Wijchen were sent to the Dutch Indies. On the basis of their memories we discover their experiences during the journey to the Dutch Indies, their  part overthere, their contacts with locals and their return to The Netherlands.

The young men also met Ducth, with or without indonesian roots, who sometimes lived their for generations. Today 99 people born in the Dutch Indies live in  Wijchen. A number of them tells about their lives overthere and what they remember about the period 1930-1950. Their stories about the move from the form colony to Wijchen and surround area and how their Indonesian, Moluccan or Chinese origin plays part in their lives today are being told.

The exhibition also shows the cultural enrichment from either The Netherlands as Indonesia as a consequence from the colonial era, like influences from each others language, food and spices. Also traditional fabrics, music and the famous wajang dolls can be seen in this exhibition.

The exhibition has been made possible in cooperation with the municipalityWijchen and several individuals.